Oh no ; now the worst part . Do I have to sit down to review ; to go along the story again. So here we go; Todays release #Dilwale Directed by Rohit Shetty set fire to theaters. oops its Simba ; Mistaken by Dilwale. 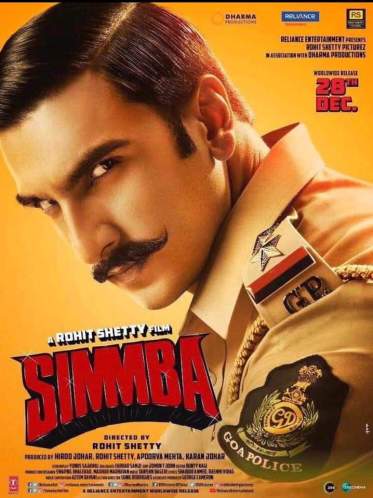 Story of a Dilwale (Simba) is simple story of a Simba (Ranveer Singh) who aims to be an inspector  to earn bribe. He posted from Shivgarh to Goa prime city where he sees girls on different locations. When one girl who had come for fir in police station; gets raped – Dont know from where his ZAMEER gets open in slow motion. Very confusing second half ; Dialogues too lengthy and Casting From where Rohit Shetty  did get that C GRADE cast.

Sarah Ali Khan; was she there in film or just for songs in dream sequence- shot on outdoor locations. Sonu Sood – sorry to say as another bad film for you  Supporting cast Bad to worse. Should hang the casting Director for giving torture casting.

Background Music is too loud . Songs nothing great as old songs like AANKH MAARE and TERE BIN NAYI JEENA are much better.

Rating : Can give just One star to movie ; that too for the Hero (Ajay Devgn) who comes to save SIMBA ( Ranveer singh) in the end when surrounded by Villians. This is totally insane, Then what was Ranveer doing in the film  Just taking Bribe and walking with Loud Background score in slow motion.