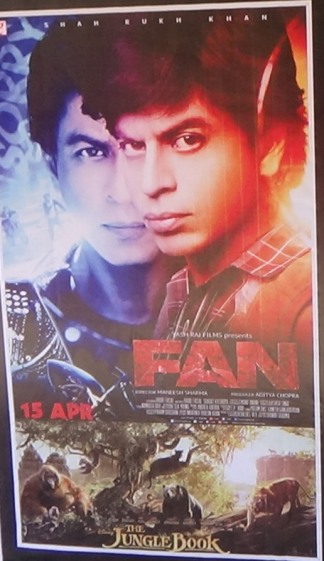 Before we get back to review, let us talk something a little about Bollywood Trivia. Movies like Filmistaan, Om Shanti Om, based on complete Movie Buff have come in past and are extremely acclaimed by viewers. Now lets see Fan, without whom Actors are incomplete – Now it fares to their Fans

Fan is a story of Die hard Aryan Khanna (SRK) Fan, portrayed by Gaurav Channa. Gaurav is huge fan and calls himself Junior Aryan Khanna. He performs on all songs of Aryan in his small town on local stage and wins trophy. Excitedly, he takes trophy to Mumbai to wish his a favorite Star Aryan Khanna by WT ticket and stays in same room 205 where Aryan stayed for first time. When Gaurav saw Aryan s fight with Rival Star Sid Kapoor, he lost his patience and went to hit him. This was biggest mistake and Aryan put him confediently in Jail and tells him to leave mumbai. Intermission will reveal biggest loss for being a fan where Gaurav comes and Burns all pictures of Aryan.

Vaani Kapoor is good in her small role as Gaurav s friend and she wants to apply for US visa so come s to Gaurav s Cyber. Illena D’Cruez is cool playing the secretary to Super star Aryan Khanna.

And lots of my Friends from UK will been in the frame in Madamme Thousands and journalists section.

Also whole movie portrays of Aryan s ego of not saying Sorry to his Fan Gaurav.

Review : Give Three stars to the film – One Star goes to showing SRK pix burnt off well guess for Haters, One star goes to Junior Aryan Khanna for playing Fan so Well and last but not least, One Star to whole and sole Director of the film Maneesh Sharma.

Fan Releases on 15th April 2016 all over in Cinemas