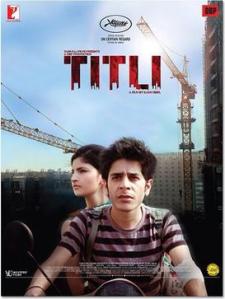 Films based on Reality sometimes do leave a deep message behind , as it well connects with common man like can say about Farook Shaikh films, which was known for their simplicity. . Lets see weather TITLI suprises audiences by it simplicity

Titli (Shashank Arora) had his own fantasies of starting his own business, as he wanted to stay away from hisHis elder brothers Vikram (Ranvir Shorey) and Pradeep (Amit Sial) who were kidnapping people for living. Dad (Lilit Behl) was rarely involved in all this.  So they decide Titli to get married inorder to take hisfreedom to Neelu (Shivani). Now Shivani loves Prince (Prashant Singh) who is a Builder and is already married. Titli decided her to take to Primce , what happens next is rest of the story.

Music of the film is universal , Now every time lyrics are not important, as it’s a  reality film so music has to be more on background score.

Acting is more frequent in all characters and puts them into real characters which I think , a Common man can go through.

Review:The film is watchable for those who belives in good piece of cinema, For all those  who used to love Farookh Shaikh movies and all

The Last Word – Ratings are not Commercial basis but on Theatrical basis, for those who belives in Good art of cinema

TITLI Releases on 30th Oct all over