Andaz (1949) is a modern tale cult  Directed By Mehboob Khan. Also This is only Film which featured Raj Kapoor and Dilip Kumar opposite each other. The Films also stars Nargis Dutt. 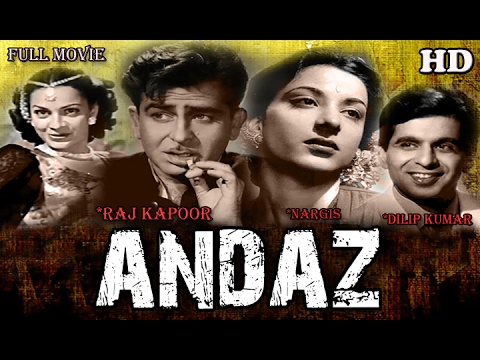 Story revolves around Neena (Nargis) who accidentally meets Dilip (Dilip Kumar) who saves her from Horse riding as Horse got out of control. Nargis and her friend Sheena , they started meeting at outings  and parties over Piano brunch with Dilip . Although Neena ‘s father had warned neena , Before judging Dilip as your friend tell him Secret.

Chill , Its just Raj and Neena as Neena had always loved Raj . Then should have hidden from Dilip and made him Business partner , Isnt it? Will Dilip forget Neena , There are lots of Question marks involved . And this is the ANDAAZ of modern Tale society which shown pretty early in 1948.

One Word For ANDAAZ – Awesome, although have seen 1994 Andaaz , 2002 Andaaz but this (Raj Kapoor) ‘s Andaz will leave you apart that such great cinema could be made in 1948 when there were hardly techniques , Sixth sound and all. Black and White cinema was more colorful then Color cinema , isnt it as far as content is concerned